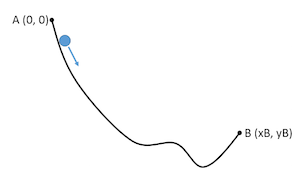 How to Solve for the Brachistochrone Curve Between Points

The shortest route between two points isn’t necessarily a straight line. If by shortest route, we mean the route that takes the least amount of time to travel from point A to point B, and the two points are at different elevations, then due to gravity, the shortest route is the brachistochrone curve. In this blog post, we demonstrate how to use built-in mathematical expressions and the Optimization Module in COMSOL Multiphysics to solve for the brachistochrone curve.

Think about the first architects who designed a bridge above water. The design process likely included several trials and subsequent failures before they could safely allow people to cross the river. COMSOL Multiphysics and the Optimization Module would have helped make this process much simpler, if they had computers at the time, of course. Before we start to discuss building and optimizing bridges, let’s first identify the best design for a simple beam with the help of topology optimization. 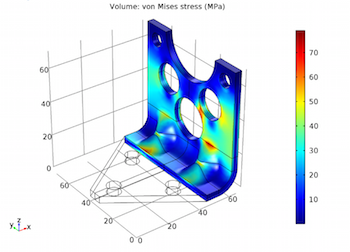 Multistudy Structural Optimization of a Bracket

Weight reduction is a key design focus in many applications. This is particularly true in the automotive industry, where lightweight materials help foster the development of fuel efficient cars. Maintaining the structural integrity of these materials is, of course, an important concern. As we will show you today, simulation is a valuable tool for addressing this challenge.

You may know of Boreas, the Greek god of North Wind, but did you know that it’s also the name of a German team for Formula 1 in schools? This is no coincidence; it describes their strong will to develop race cars that are “as fast as a storm”. With this spirit and COMSOL Multiphysics, the team won several qualifying races, reached third place in the 2014 world finals, and was honored with the innovation award for Research and Development. 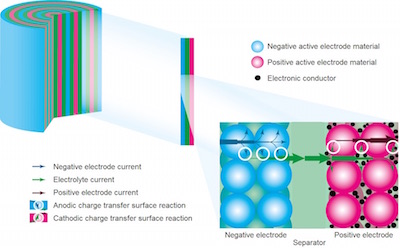 Studying Impedance to Analyze the Li-Ion Battery with an App

Batteries generally operate through numerous processes that depend on even more parameters. How can you find out more about what’s going on within them? One approach is to look at the cell’s electrical impedance. The Lithium-Ion Battery Impedance demo app, available in the Application Gallery, can be used to interpret the impedance of a specific lithium-ion battery design with minimal effort. It can also help parameterize the system, a useful step for setting up accurate time-dependent models in the future.

Previously on the blog, we have discussed the need for appropriate measured data to fit the material parameters that correspond to a material model. We have also looked at typical experimental tests, considerations for operating conditions when choosing a material model, and an example of how to use your measured data directly in a nonlinear elastic model. Our focus today will be on how to fit your experimental data to different hyperelastic material models.

There’s a new book out there for those of you who work with or research electromechanical system design. It’s titled Multiphysics Simulation: Electromechanical System Applications and Optimization and is more than your average textbook. This is a reference guide on simulation and topology optimization written with both students and industry engineers in mind.

Cardiovascular disease is a condition where the arteries in the heart are blocked by plaque. Narrowed arteries can restrict blood flow and cause chest pain and shortness of breath. Bare metal stents can be used to resolve the problem, but excessive tissue can grow over them and narrow the artery again (a process called restenosis). Engineers at Boston Scientific are using simulation to understand the release mechanisms in drug-eluting stents, which can be used to prevent this excess cell growth.