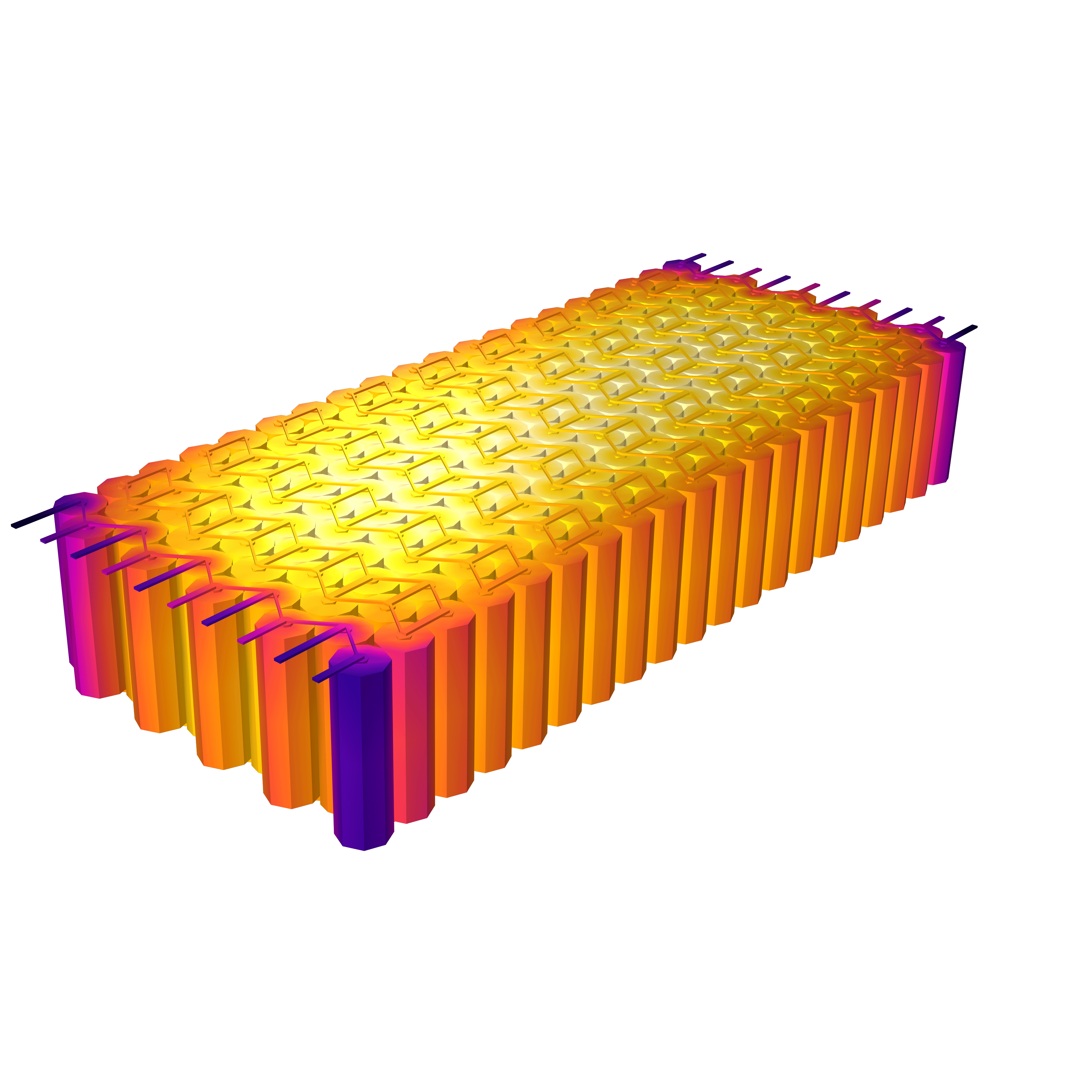 Modeling batteries requires different levels of detail depending of the purpose of the simulations. The Battery Design Module is an add-on to the COMSOL Multiphysics® software that encompasses descriptions over a large range of scales, from the detailed structures in the battery's porous electrode to the battery pack scale including thermal management systems.

The descriptions involve physics phenomena such as transport of charged and neutral species, charge balances, chemical and electrochemical reactions, Joule heating and thermal effects due to electrochemical reactions, heat transfer, fluid flow, as well as other physical phenomena important for the understanding of a battery system. For well-known and verified systems, lumped models are available and may be physics-based or based on equivalent circuits.

Note that the name of this product changed from the Batteries & Fuel Cells Module to the Battery Design Module with the release of version 5.6, while retaining all functionality. For users that model fuel cells and electrolyzers, a new Fuel Cells & Electrolyzers Module is available.

What You Can Model with the Battery Design Module

The lithium-ion battery is the most popular battery for portable applications due to its high power and energy density. The Battery Design Module features state-of-the-art models for lithium-Ion batteries. The so-called Newman model is predefined in the module with the latest findings in scientific literature. For example, different mechanisms for aging have been built-in, such as growth of the SEI, metal plating, short-circuiting, and electrolyte degradation. These high-fidelity models are available for 1D, 2D, and full 3D modeling, with an additional pseudo-dimension for modeling the intercalation of lithium in the electrode particles.

In addition to modeling the electrochemical reactions, when combining with heat transfer, a full energy balance is added. You are also able to account for the structural stresses and strains caused by the expansion and contraction from lithium intercalation, when combined with the Structural Mechanics Module.

For the latest trend in battery modeling, the module also includes functionality for heterogenous models, where the detailed structure of the porous electrodes and the pore electrolyte can be modeled for a representative unit cell of a battery. Such models may be used for a deeper understanding of the impact of the microstructure of a battery.

The studies that can be run include full transient studies, including the effect of double-layer capacitance, as well as impedance spectroscopy studies in the frequency domain.

The porous structure in the electrodes is homogenized, meaning that the pore electrolyte and the solid electrode material are present everywhere in space, and a volume fraction determines the respective properties of the phases. The transport equations and the electrochemical and chemical reactions are treated with so-called porous electrode theory as devised by Newman in the book Electrochemical Systems.

With the generic description of porous electrodes, you can define any number of competing reactions in an electrode and also couple this to an electrolyte of an arbitrary composition. For example, a tutorial model of the vanadium battery is included in the module's Application Library.

A specific version for batteries with binary electrolytes is available as predefined functionality. You can use this to model NiMH and NiCd batteries, and allows intercalating materials in the solid phase, such as hydrogen, for example.

Current distribution and electrode utilization in a large lithium-ion battery pouch cell. The model is a full 3D Newman model with a fourth dimension in every point in the electrodes representing the radius of the electrode particles.

Current density and potential distribution in a grid electrode in a lead–acid battery.

Features and Functionality in the Battery Design Module

Porous Electrodes with an Arbitrary Number of Electrochemical Reactions

Battery systems and chemistries are often burdened by unwanted side-reactions at the electrodes, and you can investigate their impact on charge and discharge cycles, as well as for self-discharge. There is a database for predefined reactions, but you can add arbitrary by-reactions to an electrode.

Typical by-reactions that you are able to model include hydrogen evolution, oxygen evolution, the growth of a solid electrolyte interface, metal plating, metal corrosion, and graphite oxidation.

The particles in porous battery electrodes can either be solid (Li-ion electrode) or porous (lead–acid, NiCd).

In the case of solid particles, the porosity in the electrode is found between the packed particles. However, transport and reactions may occur in the solid particles for small atoms such as hydrogen and lithium atoms. These intercalating species are modeled with a separate diffusion-reaction equation defined along the radius of the solid particles. The flux of the intercalating species is coupled at the surface of the particles with the species that are transported in the pore electrolyte between the particles. The intercalation species and reactions are predefined for Li-ion batteries, however, you can use the same functionality to model intercalation of hydrogen in, for example, NiMH batteries.

Battery systems are often closed systems that are difficult to study during operation. Transient methods such as potential step, current interrupt, and impedance spectroscopy can be used to characterize a battery during operation.

The thermal analysis of battery packs can be time-consuming if we use full 3D models for the electrochemistry. An alternative is to use validated lumped (simplified) models for each battery in a pack. Once validated, the lumped models may give an excellent accuracy within a particular (maybe limited) range of operation.

One of the more time-consuming and error prone steps in the modeling of battery systems is to gather input data and to use it consistently. For example, it is important that the positive and negative electrodes are defined in the same reference systems. The equilibrium electrode (half-cell) potentials have to be measured or calibrated to the same reference electrodes, electrolytes, and temperatures before they are incorporated in the same battery system model.

The battery material database included in the module contains entries for a number of common electrodes and electrolytes, substantially reducing the amount of work needed for creating new battery models.

The positive electrode in a lead–acid battery may suffer from the oxygen evolution by-reaction, which is added in the user interface. The plot shows the electrolyte salt concentration (both pore electrolytes and separator) as a function of time during discharge at 20C.

Model of a NiCd battery with detailed electrochemistry and transport of hydrogen ions in the porous microstructure.

Simplified physics-based electrochemical model for a lithium-ion battery combined with a 3D heat transfer analysis. Each battery unit cell in the back gets a simplified temperature-dependent electrochemistry model.

The functions for the electrode potential as a function of state of charge (SOC) for different electrodes, and the conductivities for electrolytes as well for electronic conductors can all be obtained from the built-in database for a number of chemistries.

Every business and every simulation need is different. In order to fully evaluate whether or not the COMSOL Multiphysics® software will meet your requirements, you need to contact us. By talking to one of our sales representatives, you will get personalized recommendations and fully documented examples to help you get the most out of your evaluation and guide you to choose the best license option to suit your needs.

Just click on the "Contact COMSOL" button, fill in your contact details and any specific comments or questions, and submit. You will receive a response from a sales representative within one business day.

Next Step:
Request a Software
Demonstration